Here is my monthly update covering what I have been doing in the free software world during October 2020 (previous month):

SPI is a non-profit corporation that acts as a fiscal sponsor for organisations that develop open source software and hardware.

Lintian dissects Debian packages and reports bugs and policy violations. It contains automated checks for many aspects of Debian policy as well as some checks for common errors.

For Lintian, the static analysis tool for Debian packages, I uploaded versions 2.97.0, 2.98.0, 2.99.0 & 2.100.0 as well as updated the declares-possibly-conflicting-debhelper-compat-versions tag as we may specify the Debhelper compatibility level in debian/rules or debian/control (#972464) and dropped a reference to missing manual page [...].

One of the original promises of open source software is that distributed peer review and transparency of process results in enhanced end-user security. However, whilst anyone may inspect the source code of free and open source software for malicious flaws, almost all software today is distributed as pre-compiled binaries. This allows nefarious third-parties to compromise systems by injecting malicious code into ostensibly secure software during the various compilation and distribution processes.

The project is proud to be a member project of the Software Freedom Conservancy. Conservancy acts as a corporate umbrella allowing projects to operate as non-profit initiatives without managing their own corporate structure. If you like the work of the Conservancy or the Reproducible Builds project, please consider becoming an official supporter. 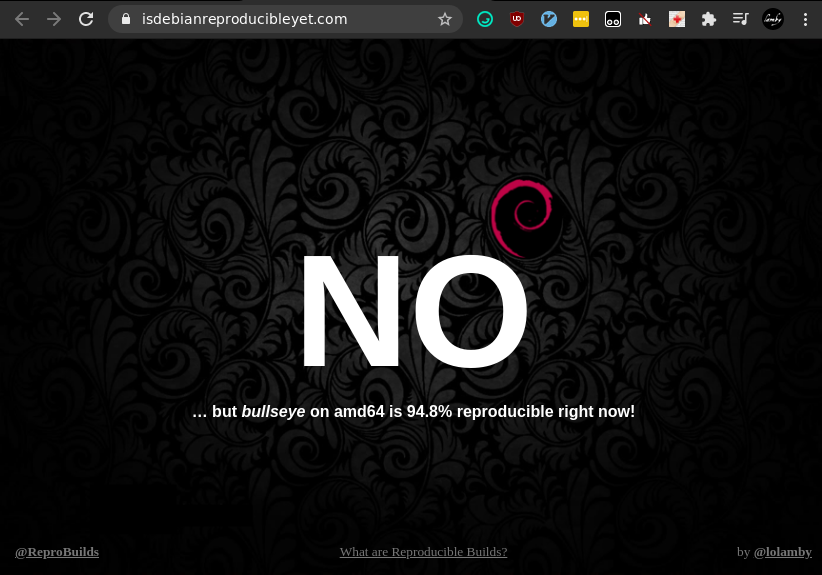 I also updated the main Reproducible Builds website and documentation:

diffoscope is our in-depth and content-aware diff utility that can locate and diagnose reproducibility issues.

Lastly, I made the following changes to diffoscope, including preparing and uploading version 161 to Debian:

trydiffoscope is the web-based version of diffoscope. This month, I made the following changes:

This month I have worked 18 hours on Debian Long Term Support (LTS) and 12 hours on its sister Extended LTS project.

You can find out more about the project via the following video: