I was recently invited to give a seminar at the Cambridge University's Department of Computer Science and Technology on the topic of Reproducible Builds. Whilst it was an honour to have been asked, it also afforded an opportunity to drink coffee from the so-called "Trojan Room" which previously housed the fabled Computer Laboratory coffee pot: 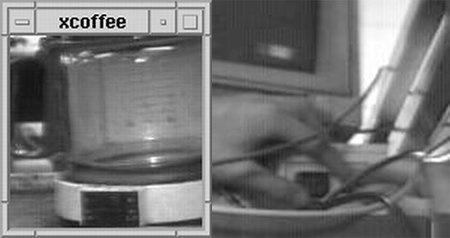 For those unaware of the background, to save hackers in the building from finding the coffee machine empty, a camera was setup on the local network in 1991 using an Acorn Archimedes to capture a live 128×128 image of the pot, thus becoming the world's first webcam.

According to Quentin Stafford-Fraser, the technical limitations at the time did not matter:

The image was only updated about three times a minute, but that was fine because the pot filled rather slowly, and it was only greyscale, which was also fine, because so was the coffee.

Whilst the original pot was sold for £3,350 in 2001 what, you may ask, did I think of the coffee I sampled? Did the historical weight of the room imbue a certain impalpable quality into the beverage itself? Perhaps this modern hacker lore inspired deep intellectual thoughts in myself? Did it infuse a superlative and indefinable depth of flavour that belied the coffee's quotidian origins…? 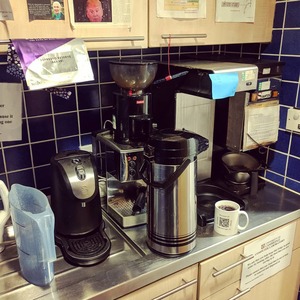 (Thanks to Allison Randal for arranging this opportunity.)